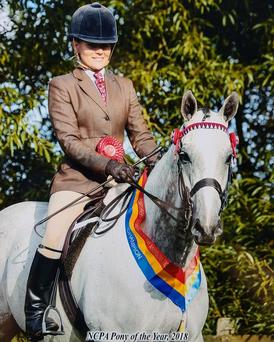 'I began riding at six years old, at a local riding school, where I later stabled my first pony Spice. Spice taught me everything a first pony should teach: how to avoid a set of teeth when girthing up; how to somersault spectacularly when stopping sharply at a fence and how to trick a pony to come in to be ridden when the spring grass tastes much better than a snaffle bit!

When Spice was outgrown, I advanced on to newly broken yellow dun Highland mare Goldcrest of Dykes (Dixie), who was in time successful on the local showing circuit and was responsible for giving me the showing bug. I sadly lost Dixie, aged 18, in 2010; however, my fantastic memories of her live on....
When Dixie retired from her ridden and working hunter classes, I started riding for Peter Emmerson (http://www.emmersonsshowteam.co.uk) and enjoyed learning about the production of show horse and ponies at county level. I gained the ride on Tarka 3rd and started to ride in HOYS qualifiers. I also enjoyed schooling and helping to break the show ponies on the yard. This is where my HOYS dream began...

I saved up and bought a newly broken four year old, 'Traemarr Seattle' and gained sponsorship from Prestige Browbands, Show Ring Classifieds and www.horsebitbank.com in 2009. I received dressage training from Kirstie Parrish and brought 'Frazier' up to an open standard; I then sold him in 2011 and continued to work on gaining more experience riding on weekends around my full time job, for other showing people such as Emma Blundell, (http://www.mountstjohnequestrian.co.uk) where I gained experience riding a range of show and dressage horses.

In 2011, I began riding Deards Blue Print for the home-produced, amateur Heaton family. 'William' and I enjoyed some special wins together, best of all winning at White Rose County 2012 and qualifying for RIHS! My second RIHS ticket was the following season with coloured horse Picasso 4th. William and I then went on to compete in Olympia veteran classes, narrowly missing our ticket on a number of occasions.

As well as competing William in the intermediate show riding type sections, I gained the ride on Time Out for the home-produced, amateur Harris family. We just missed our HOYS ticket on several occasions in 2011 but in 2012 at Stithians Show, Cornwall, I gained my first HOYS ticket and much to my delight, rode him in October at HOYS. 'Herbie' gave me a foot perfect HOYS debut.

In April 2012, I stumbled across racehorse Stevey's Lad, when riding out at Phil Kirby's Racing Yard in preparation for a charity race at Southwell on Triple Eight, (who finished 2nd, raising £725 for Hunt Staff Benefit Society.) I offered to take him to enjoy some local shows and summer hacking with - little did I expect to be finishing the season with another HOYS ride after qualifying in the main arena at Burghley Horse Trials. Stevey finished 7th at HOYS, just 5 months out of his racing environment. With Topsec's support, (www.topspec.com)we also gained wins at Ponies UK and Champion ROR at the British Elite. Stevey's qualifying story was published in the HOYS catalogue. Stevey has had another fabulous year starting with a HOYS ticket when I rode him at Badgworth for his new owner and ending with a 9th in the International Arena at HOYS for his final show ring performance. I was thrilled to be asked to ride him in the ring again at Hickstead ROR Final for the national hunt section 2013.

In 2012, I also purchased yearling Highland colt 'Talisker Bow Bells' from Catriona Carnegie. Bow is very versatile and has hunted with the Bilsdale; won on the local competitive unaffiliated dressage and SJ circuits; had successes inhand and ridden (qualifying for the Picton final for 2 consecutive years, finishing reserve supreme in the NCPA POYS President's Cup, qualifying NPS Silver medal finals etc). Bow also won the HPEC Performance Award for 2 consecutive years, taking the leading stallion award. With some time to mature, and after being gelded as a 7 year old, I hope to do WHP with Bow in 2019.

In 2013, I won the Equilibrium Rising Stars £1000 sponsorship competition. At the end of the 2013 season, I was also selected as the winner of the Handsome Horse Designer Products Brand Ambassador Competition, too. See my sponsors page for more information about potential sponsorship.

In the past, in my spare time, I have enjoyed riding out on racing yards and have ridden out for: H. Hogarth, Phil Kirby and Edwin Tuer. I also owned a point2pointer 'Jack Boland' who was trained by my partner Fergus King to win in his first and only race in 2010. I also enjoy hunting, show jumping, dressage and hacking out; I think it is important for show horses to have a varied work program and so I like to jump school my ponies and hack out as a break from schooling and I ensure I have them turned out over the summer as much as possible, too.

In 2013, I was appointed to The Showing Register, PUK, NCPA, Royal London, S4AS and BSPS ride judge panels. I am also on the TSR pony panel.  I am also on the ROR ride and conformation panels after passing assessment in January 2014 - I ran the Great North Run for ROR 2015. I was also accepted on to the Senior Showing and Dressage Ltd Panel. It will be lovely to give something back to showing and to enjoy showing from a different perspective. I also enjoy offering my help at showing clinics and successfully completed a TSR Talent Spotting Clinic and an ROR showing clinic in April 2014.

I work as a full time English secondary school teacher in North Yorkshire and balance my horses and showing around work. My horses are my hobby and my passion. I ensure that my show horses are exercised daily before / after work.

In February, I was nominated for the TSM BETA International Sponsored Rider Award and it was announced 16th February 2014 that I was successful and had won the award after being shortlisted with my equestrian hero Carl Hester!! This was a great start to 2014 and was followed with my loan pony: Mullagh Sunrise qualifying for the NPS Picton Final, NPS 5year old open final, NCPA and Equifest on her first attempt, as well as her best friend Talisker Dearg Mhor qualifying for the Picton, NCPA and Equifest, also, who was loaned to me for the start of the 2014 season.

After a few years of competing locally with my own pony and learning new skills like riding side saddle when riding for others, I finally felt ready to return to ROR showing and began retraining Silo Blue Native in 2017. His showing career kick started in 2018 with a win on his first outing, qualifying for the novice Aintree championship. He followed this up with championship wins at NCPA POYS and his biggest win was at the ROR End of Season Party where he was crowned ROR Heart Throb 2018 in the Heart Awards. In 2019, he had several county wins and championships.

In 2020, I began to develop a new Instagram page @samanthaosborneequestrian and with the support from Equestrian Sponsorship Hub, I am hoping to develop as an equestrian influencer. I am also training to join the British Showjumping world! 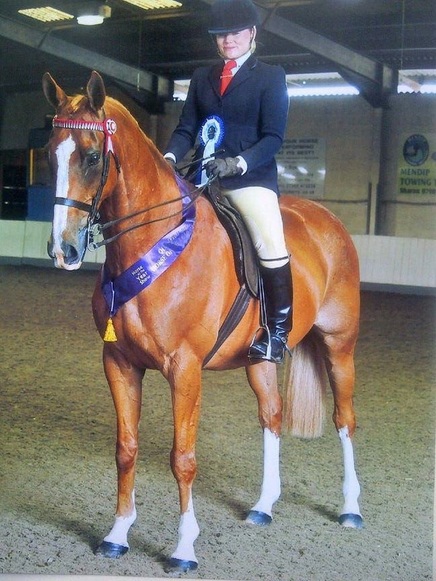 Stevey's Lad qualifying for Horse of the Year Show for the second season running, partnered with myself and some very emotional tears!!
Powered by